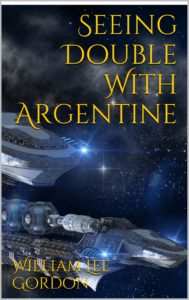 I hope you will find it funny, poignant, mysterious, and suspenseful.

Captain Frank Argentine and his dysfunctional crew have discovered an unbelievably advanced ship… One they could probably sell for enough that all of them could go their separate ways and live lives of luxury.

But then they discover what the ship was built for…

What an absolute blast! I’ve read hundreds of books and gotta say, haven’t had this much fun with a piece of science fiction in awhile.
The character development is phenomenal, the plot never quite gets stale nor does the author rely on crazy Duce ex Machina.
Strap on your seat belts and buckle up for a blast!

Any Sci-fi lover’s Must Read

Ok, I may be a grammar fascist but even the extremely few errors weren’t enough to bump this from 5 to 4 stars.
If you’re looking for a true human read, no forced ‘proper english’ phenomenon, this book is definitely for you. You will love some characters, despise other evils, and question the depths of those you only get a glimpse of (most likely why you’re so looking forward to book 2).
All I can say is this, you must read it, you will be glad you did.

Running With Argentine was an unexpected surprise. This is a space opera of the first order.
Frank Argentine is the Executive Officer of the warship Penguin. They are from a star system controlled by a two-bit dictator. The government is falling apart at the seams. Hiding in an asteroid belt, trying to avoid an enemy convoy, the Penguin’s Political Officer orders the Captain to make a mad dash for their home planet. The move is a suicide run. They calculate only a 2% chance of survival.
Argentine and other officers see the need for an intervention, so they mutiny and take the Captain and Political Officer into custody. Argentine is now in charge. The only thing to do is run in the opposite direction.
If you’re thinking this is a ‘spoiler’, trust me. This is just the tip of the iceberg! Running With Argentine is so much more than this opening exchange. By the time you reach the end, you’ll have forgotten this minor incident.
This is such an engrossing story that I read it from start to finish in a single sitting. The action does not let up. The Penguin goes from one hard obstacle to the next without flinching. What will they do? Where will they go? Argentine is in charge and makes it up as he goes along.
There are several mind-blowing twists and turns to this tale that it’s impossible to describe. Let’s just say that you’ll not be bored or disappointed. You get sucked in at the beginning, then spit out at the end. This is one of those stories that you hate to put down, then when you do, you can’t wait to get back to it. The kind of book you love.
Characters are well developed, with diverse personalities…