Excerpt from RUNNING WITH ARGENTINE: 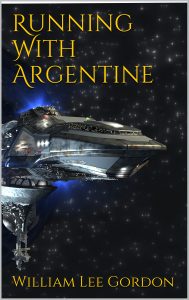 No one ever called First Officer Francis ‘Frank’ Argentine by his given first name. The last two people that tried it had gotten popped in the mouth. The first one had backed off and apologized. The second had taken umbrage and accepted the first officer’s challenge to dance. It had cost him two days in the hospital but the result was that no one ever again called him Francis. Actually, no one called him Frank either. Everyone on the ship called him First and everyone else called him Argentine.

He was a large, almost ruggedly handsome man; or at least his features were mostly symmetrical and his face didn’t carry any disfiguring marks.

What you wouldn’t realize unless you knew him was that this lean bear of a man had the heart of a teddy bear.

That’s not to say that he loved, admired, or respected everyone and everything around him; most of the time he hid his good nature quite well.

“You know it’s going to happen someday,” said Chief Engineer Carlton West. “Someday I’m going to pop that pompous SOB right in the mouth. I don’t know how you’ve controlled yourself this long.”

He was either talking about Captain Samuel Underhill Kerry or the Political Officer, Ernest J. Bloomington. It didn’t really make any difference; they were both pompous jerks.

“And what good would that do you?” asked Argentine. “They’d just ship your butt off to Macklin and you’d spend the rest of your life in a small cell. Either that or they’d decide to save money and just space you.”

As was typical when Chief West was on a roll he didn’t relent easily.

“They don’t have any money to save,” he responded. “And besides, isn’t Macklin prison in the Fargo sector?”

He had a point on both counts.

The Fargo sector had gone dark a month ago. The rest of the Republic hadn’t had any communication with it and there had been no traffic coming out of it. The rumor was that it had seceded from the People’s Republic of Chezden.

Normally, such uprisings would be put down immediately. Warships like this one would have been sent to brutally suppress the secessionist. The problem was that parts of the fleet were starting to go dark too. But then that was to be expected when nobody had been paid for four months.

The People’s Republic of Chezden was falling apart.

It’d been a long time coming. The People’s Republic was not large as far as stellar empires go; it claimed to encompass a thousand stars but everyone knew that only a little over one-hundred of them were populated.

170 years ago a lunatic named Syed Franklin had wandered into this sector of space from upspiral. He had found a relatively peaceful association of planets involved in mutual trade, quietly pursuing their own prosperity.

In other words, he’d stumbled across a bunch of parochial rubes that were more concerned with their own families than they were in any political machinations.

With such naïveté and only an insignificantly small percentage of the population paying attention, he had proceeded to take advantage.

Syed’s political rise followed the usual course for such oppressors. There was no single revolutionary moment, but rather a long slow succession of incremental victories over individual and planetary rights.

Sowing dissent and manufacturing grievances he quietly started turning the factions against each other. Finally, violence broke out. This, of course, required a much stronger government and if the people had to give up some of their freedoms to ensure their safety… so what?

Eventually, he created and fomented outside threats to add to the internal turmoil. Throughout all of this his popularity kept rising. He had actually managed to convince the majority that he was simply warning them of these previously unnoticed injustices in their society, not causing them. Since that same majority paid little attention it wasn’t difficult.

It would be impossible to say when Syed actually took total control, but the People’s Republic of Chezden was founded 154 standard years ago.

It had been a living hell ever since.

By the time Frank Argentine was approaching adulthood there weren’t many attractive career options.

He didn’t have any family connections but he was big enough and athletic enough that the military would consider him. Not only did this ensure him of a government job but it helped satisfy what he thought of as his patriotic duty. After all, he’d grown up with all the propaganda about serving the People’s Republic.

It hadn’t taken him long, however, to figure out that it wasn’t really a republic and that the people had nothing to do with it.

By then he was trapped into a career that he belatedly realized he despised. His only consolation was that many of his fellow armsmen were just as disillusioned.

So he survived. Like everyone else he had played the game until three years ago, when he had found himself assigned as First Officer to the People’s Republic Ship Pelican.

At first, he’d thought the promotion would make his life easier. He’d quickly discovered, however, that when a ship was captained by a political appointee a first officer’s life was pure misery. Not only did he have to run the ship but he had to put up with the ineptitude of the Captain and the insane ramblings of its Political Officer. Their constant interference and conflicting orders had made running an efficient ship impossible.

About a year ago he’d had an epiphany that had made his life much easier. Being loyal to the Captain and the Political Officer would not only lead to a non-battle worthy ship, it would turn his stomach. So he decided to lie.

Now, when the Political Officer asked if one of his insane proclamations have been carried out Augustine responded with, “Yes sir. Your new policy has been implemented and the men are carrying out your wishes!”

“Yes, Captain. I know you ordered all department heads to attend your daily briefings but Political Officer Bloomington countermanded that order because it interfered with his political education classes. Quite frankly sir, I’m not sure the political officer really respects you.”

“Minister Bloomington, I don’t think I’m supposed to tell you this but the Captain has suggested that his authority exceeds yours. I hope I’m not speaking out of turn, sir. But I thought you should know…”

It was really becoming fun.

Frankly, Augustine was amazed that he had gotten away with it for as long as he had. But since the Captain rarely inspected the ship and the Political Officer never left the Officer’s Deck it hadn’t been too difficult. And it had certainly made Augustine’s life easier.

Of course, he’d needed some help to pull it off.

That’s where Chief Engineer West came in. They’d been friends ever since Augustine had caught the chief requisitioning three times the replacement parts needed or allowed. Augustine knew that it wasn’t necessarily an unusual practice and that many of the parts could be sold on the black market, but the chief had been vociferously unapologetic. He’d insisted that if he didn’t order parts in triplicate he might not even get one, and yes, extras that were sold allowed him to bribe supply officers and others of more ill repute to get the parts that otherwise he never would have received at all.

In the end, it was all Augustine could do not to laugh. The Chief was still loudly proclaiming his virtue when Augustine had simply walked away, shaking his head.

His other real friend on board was astrogator Samantha Parker. ‘Sami’ had already been onboard when Augustine was assigned to the P. R. S. Pelican three years ago. She had fascinated Argentine. Not because she was attractive, which she was in a weird ditzy sort of way, but because she was so smart that she was oblivious to the putdowns and arrogance of the Captain and the Political Officer.

They hated her because she could outthink them six ways to Sunday, but she was far too valuable to discard. So instead they treated her like dirt and did it in a very public way.

When Augustine had realized how smart she was, and undeserving of the regime’s pettiness, he had taken her under his wing. There wasn’t a lot he could do publicly, but privately he protected her – and the rest of the crew noticed. With newfound confidence, Sami had bloomed and her professional competence soared. At Augustine’s suggestion she never showed off her talents to the ship’s command, but her constant practicing rose her simulation scores off the chart for astrogational competence.

Fortunately, the Pelican was a small ship.

She carried a complement of 23, with seven of those being the Weapons and Security Officer and his six troops.

As a matter of fact, that Weapons and Security Officer was the only other member of the crew totally loyal to the regime. Lieutenant José Stark was a quiet man of intensity. The kind of intensity where you just knew that he’d as soon rip your arm off as shake your hand.

José reported directly to Political Officer Bloomington. So while the Captain was nominally in charge of the ship, Bloomington wielded the real power. Which is a screwed up way to run a ship, but then that was the People’s Republic.

The rest of the crew was pretty much ambivalent.

They went along with whatever protective schemes First Officer Argentine came up with but he was under no illusions that it wasn’t more out of self-interest than loyalty to him. Most had long ago had their sense of duty burned out of them and were far too cynical and resigned to offer any of their own resistance.

Not that Argentine thought of himself as being rebellious; but at least he wasn’t ready to roll over and play dead, yet.

And then, everything changed…