MY FRIEND THE EMPEROR 2 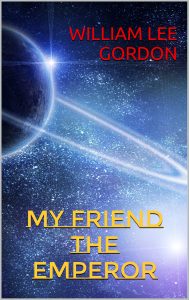 Cover art may vary on print, eBook, and audio editions

He was naïve to think he could change the system.

But he doesn’t want to destroy it… Does he?

A common boy grows up to discover he has an uncommon legacy. Thrown totally unprepared into the cutthroat politics of a galactic empire, he must learn how to survive and who to trust.

His naiveté could be the death of him and a lot of people want to use him for different purposes. One of those purposes is to babysit the third in line for the throne, the grown irresponsible son of the Emperor.

All he ever wanted to do was help his family and help his people; now he finds the fate of the Empire may lie in his hands.

And then, of course, there’s the Outside Threat…

2 thoughts on “MY FRIEND THE EMPEROR”